Welcome to the first instalment of Friday Commons. I spend a lot of my time carping on about some of the great & odd & impossibly interesting material available for creative reuse. Sometimes I like to spread the word about witches; at other times, I talk about poetry, or paintings,or Pukeho. I once linked to a Bestiarium.
As all librarians and historians already know, the commons is a richer and stranger place than most of us ever suspected. So, why not bring some of this to the Creative Commons Aotearoa New Zealand website?
Let’s get into it. First, we have The Walrus, from the nineteenth century Austrian painter Aloys Zötl, part of his Bestiarium. Read more about it at The Public Domain Review.

While I’m looting material from The Public Domain Review, I’ll point you to the spectacularly titled The Criminal Prosecution and Capital Punishment of Animals, 1906, by EP Evans. That link takes you to the whole book, which you can read, if you’d like. For now, though, I’ll give you this: ‘Trial of a Sow and Pigs at Lavegny,’ from The Book of Days (1863) edited by Robert Chambers, found in Nicholas Humphrey’s great piece on animals on trial. 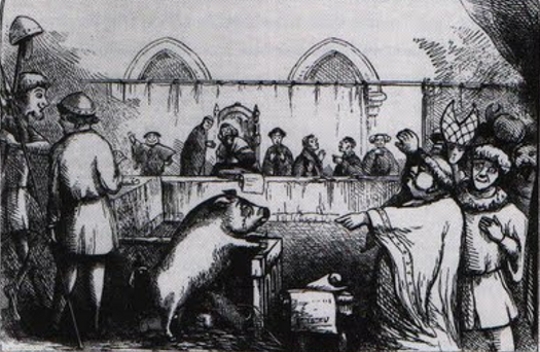 This next image is from the Auckland Weekly News, September 3, 1908. Its title is “Hunting the King of Beasts: A Platform Erected in the African Jungle from Which to Shoot Lions.” Very descriptive. This work is in the public domain, and is available from Auckland City Libraries. I found it using Digital NZ.

Allocamelus here is from Topsell’s The History of Four-footed Beasts and Serpents, 1658. This image is in the public domain, and can be found in the Special Collections of the University of Houston Libraries. I found it on Wikimedia Commons. 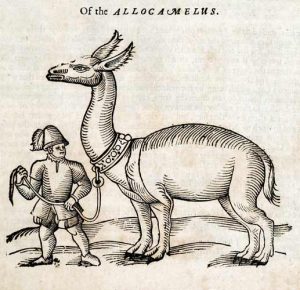 That’s enough for now. If you have anything comparably odd you’d like to share, throw a link in the comments. And if you like the idea of collecting images under various themes, go to Digital NZ and make a set.